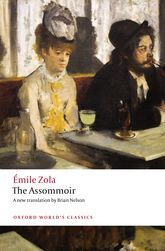 Gervaise had waited up for Lantier until two in the morning. Then, shivering all over from sitting half undressed in the cold air from the window, she’d slumped across the bed, feeling feverish, her cheeks wet with tears. For a week now, when they came out of the Veau à Deux Têtes,* where they had their meals, he’d sent her home to bed with the children and not come in himself until the early hours, saying he’d been looking for a job. That particular evening, as she was looking out for him, she thought she saw him go into the Grand-Balcon* dance hall, whose ten blazing windows lit up the black expanse of the outer boulevards* with a sheet of flame, and she’d caught sight of little Adèle, a metal polisher who ate at their restaurant, five or six paces behind him, her hands dangling as if she’d just let go of his arm so they wouldn’t be seen together in the glaring lights of the doorway.