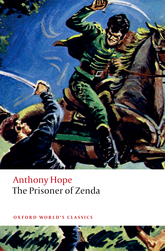 ‘If love were the only thing, I would follow you-in rags if need be ... But is love the only thing?’ Anthony Hope's The Prisoner of Zenda is a swashbuckling adventure set in Ruritania, a mythical pocket kingdom. Englishman Rudolf Rassendyll closely resembles the King of Ruritania, and to foil a coup by his rival to the throne, he is persuaded to impersonate him for a day. However, Rassendyll's role becomes more complicated when the real king is kidnapped, and he falls for the lovely Princess Flavia. Although the story is set in the near past, Ruritania is a semi-feudal land in which a strong sword arm can carry the day, and Rassendyll and his allies fight to rescue the king. But if he succeeds, our hero and Flavia will have to choose between love and honour. As Nicholas Daly's introduction outlines, this thrilling tale inspired not only stage and screen adaptations, but also place names, and even a popular board game. A whole new subgenre of ‘Ruritanian romances’ followed, though no imitation managed to capture the charm, exuberance, and sheer storytelling power of Hope's classic tale.