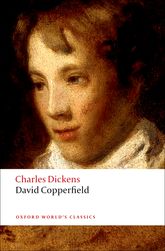 ‘I have in my heart of hearts a favourite child. And his name is DAVID COPPERFIELD,’ wrote Dickens of what is the most personal, certainly one of the most popular, of all his novels. Dickens wrote the book after the completion of a fragment of autobiography recalling his employment as a child in a London warehouse, and in the first-person narrative, a new departure for him, realized marvellously the workings of memory. The embodiment of his boyhood experience in the novel involved a ‘complicated interweaving of truth and fiction’, at its most subtle in the portrait of his father as Mr Micawber, one of Dickens’s greatest comic creations. Enjoying a humour that never becomes caricature, the reader shares David’s affection for the eccentric Betsey Trotwood and her protégé Mr Dick, and smiles with the narrator at the trials he endures in his love for the delightfully silly Dora. Settings, (East Anglia, the London of the 1820s), people, and events are unified by their relationship to the story of Steerforth’s treachery, which reaches its powerful climax in the storm scene. This edition, which has the accurate Clarendon text, includes Dickens’s trial titles and working notes, and eight of the original illustrations by ‘Phiz’.