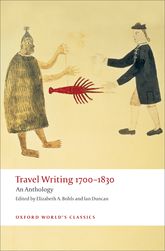 Edited by: Elizabeth A. Bohls  and Ian Duncan