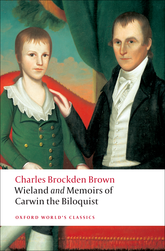 Wieland; or The Transformation, and Memoirs of Carwin, The Biloquist

One of the earliest American novels, Wieland (1798) is a thrilling tale of suspense and intrigue set in rural Pennyslvania in the 1760s. Based on an actual case of a New York farmer who murdered his family, the novel employs Gothic devices and sensational elements such as spontaneous combustion, ventriloquism, and religious fanaticism. The plot turns on the charming but diabolical intruder Carwin, who exercises his power over the narrator, Clara Wieland, and her family, destroying the order and authority of the small community in which they live. Underlying the mystery and horror, however, is a profound examination of the human mind's capacity for rational judgement. The text also explores some of the most important issues vital to the survival of democracy in the new American republic. Brown further considers power and manipulation in his unfinished sequel, Memoirs of Carwin the Biloquist, which traces Carwin's career as a disciple of the utopist Ludloe.