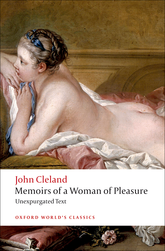 Memoirs of a Woman of Pleasure

Memoirs of a Woman of Pleasure (commonly known as Fanny Hill), the most famous erotic novel in English, was denounced by its author as 'a Book I disdain to defend, and wish, from my soul, buried and forgot'. Cleland's critics too condemned the 'infamous' and 'poisonous' novel when it first appeared in 1748-9. But the proliferation of editions, adaptations, and translations since then bears witness not only to the popularity of scandalous novels, but also to the book's literary merit. Recounted with a lively use of metaphor and some curiously moral asides, Fanny Hill's boisterous education as a London prostitute never quite effaces the ingenuous charm of her country upbringing, and her story places her among the great heroines of eighteenth-century literature.