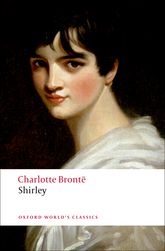 ‘You expected bread, and you have got a stone; break your teeth on it, and don’t shriek…you will have learned the great lesson how to endure without a sob.’ Shirley is Charlotte Brontë’s only historical novel and her most topical one. Written at a time of social unrest, it is set during the period of the Napoleonic Wars, when economic hardship led to riots in the woollen district of Yorkshire. A mill-owner, Robert Moore, is determined to introduce new machinery despite fierce opposition from his workers; he ignores their suffering, and puts his own life at risk. Robert sees marriage to the wealthy Shirley Keeldar as the solution to his difficulties, but he loves his cousin Caroline. She suffers misery and frustration, and Shirley has her own ideas about the man she will choose to marry. The friendship between the two women, and the contrast between their situations, is at the heart of this compelling novel, which is suffused with Brontë’s deep yearning for an earlier time.