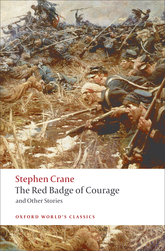 The Red Badge of Courage and Other Stories

The Red Badge of Courage (1895) is a vivid psychological account of a young man’s experience of fighting in the American Civil War, based on Crane’s reading of popular descriptions of battle. The intensity of its narrative and its naturalistic power earned Crane instant success, and led to his spending most of his brief remaining life war reporting. The other stories collected in this volume draw on this experience; ‘The Open Boat’ (1898) was inspired by his fifty hour struggle with waves after his ship was sunk during an expedition to Cuba; ‘The Monster’ (1899) is a bitterly ironic commentary on the ostracization of a doctor for harbouring the servant who was disfigured and lost his sanity rescuing his son. As a rare example of Crane working in a vein of American Gothic, it is particularly striking for its treatment of race and social injustice. ‘The Blue Hotel’ traces the events that lead to a murder at a bar in a small Nebraska town. This edition is the most generously annotated edition of Crane’s work, exploring it from a fresh critical perspective and focusing on his place as an experimental writer, his modernist legacy and his social as well as literary revisionism.