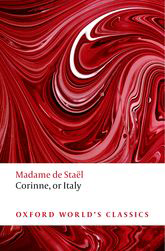 ‘Look at her, she is the image of our beautiful Italy.’ Corinne, or Italy (1807) is both the story of a love affair between Oswald, Lord Nelvil and a beautiful poetess, and an homage to the landscape, literature and art of Italy. On arriving in Italy, Oswald immediately falls under Corinne’s magical spell as she is crowned a national genius at the Captitol. Yet, on returning to England, he succumbs to convention and honours his late father’s wish by marrying the dutiful English girl, Lucile, despite having learned that Corinne is Lucile’s Italian half-sister. Corinne dies of a broken heart and Lord Nelvil is left with a seared conscience. Staël weaves discreet French Revolutionary political allusion and allegory into her romance, and its publication saw her order of exile renewed by Napoleon. Indeed, the novel stands as the birth of modern nationalism, and introduces to French usage the word ‘nationalitié’. It is also one of the first works to put a woman’s creativity centre stage. Sylvia Raphael’s new translation preserves the natural character of the French original and the edition is complemented by notes and and introduction which serve to set an extraordinary work of European Romanticism in its historical and political contexts.