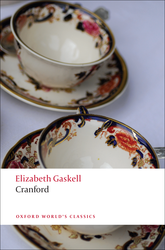 A man … is so in the way in the house!’ A vivid and affectionate portrait of a provincial town in early Victorian England, Elizabeth Gaskell’s Cranford describes a community dominated by its independent and refined women. Undaunted by poverty, but dismayed by changes brought by the railway and by new commercial practices, the ladies of Cranford respond to disruption with both suspicion and courage. Miss Matty and her sister Deborah uphold standards and survive personal tragedy and everyday dramas; innovation may bring loss, but it also brings growth, and welcome freedoms. Cranford suggests that representatives of different and apparently hostile social worlds, their minds opened by sympathy and suffering, can learn from each other. Its social comedy develops into a study of generous reconciliation, of a kind that will value the past as it actively shapes the future. This edition includes two related short pieces by Gaskell, ‘The Last Generation in England’ and ‘The Cage at Cranford’, as well as a selection from the diverse literary and social contexts in which the Cranford tales take their place.