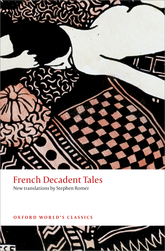 ‘He had become the dandy of the unpredictable.’ A quest for new sensations, and an avowed desire to shock possessed the Decadent writers of fin-de-siècle Paris. The years 1880–1900 saw an extraordinary, hothouse flowering of talent, that produced some of the most exotic, stylized, and cerebral literature in the French language. While ‘Decadence’ was a European movement, its epicentre was the French capital. On the eve of Freud’s early discoveries, writers such as Gourmont, Lorrain, Maupassant, Mirbeau, Richepin, Schwob, and Villiers engaged in a species of wild analysis of their own, perfecting the art of short fiction as they did so. Death and Eros haunt these pages, and a polymorphous perversity by turns hilarious and horrifying. Their stories teem with addicts, maniacs, and murderers as they strive to outdo each other. This newly translated selection brings together the very best writing of the period, from lesser known figures as well as famous names. Provocative and unsettling, these extraordinary, corrosive little tales continue to cast a cold eye on the modern world.