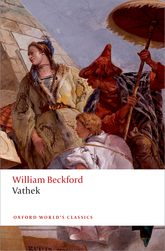 Woe to the rash mortal who seeks to know that of which he should remain ignorant; and to undertake that which surpasseth his power!’ The Caliph Vathek is dissolute and debauched, and hungry for knowledge. When the mysterious Giaour offers him boundless treasure and unrivalled power he is willing to sacrifice his god, the lives of innocent children, and his own soul to satisfy his obsession. Vathek’s extraordinary journey to the subterranean palace of Eblis, and the terrifying fate that there awaits him, is a captivating tale of magic and oriental fantasy, sudden violence and corrupted love, whose mix of moral fable, grotesque comedy, and evocative beauty defies classification. Originally written by Beckford in French at the age of only 21, its dreamlike qualities have influenced writers from Byron to H. P. Lovecraft. This new edition reprints Beckford’s authorized English text of 1816 with its elaborate and entertaining notes. In his new introduction Thomas Keymer examines the novel’s relations to a range of literary genres and cultural contexts.