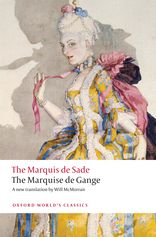 The Marquis de Sade  and Will McMorran

The testament of Louis XIII, which established a Regency council, annulled by a Court of Justice* decree according to the wishes of Anne of Austria, that monarch’s widow; the investiture of this Princess as Regent for an indefinite period; the war which obliged the Regent to arm the French against Philippe, her brother, whom she nonetheless loved very dearly (a disastrous war, which had endured for the last thirteen years); the Regent’s choice of Mazarin, who held sway over both this sovereign and all of France; the civil war, an inevitable result of discord, or of boundless ambition among ministers; the dangerous ongoing conflict between the Courts of Justice and the supreme ruler; the arbitrary arrests of Noviac, Chardon, Broussel, etc., carried out and resisted with shots fired, and which left Paris bristling with barricades on that fateful day in which the Cardinal de Retz took such brazen pride;* the court’s retreat to Saint-Germain,* where everyone slept on straw; the nonage of Louis XIV, who at the time was only eleven years of age; all these calamitous circumstances offered a less than serene prospect for the early days of the marriage which Mademoiselle de Rossan, daughter of one of the wealthiest gentlemen of Avignon, contracted in 1649 with the Comte de Castellane, son of the Duc de Villars.