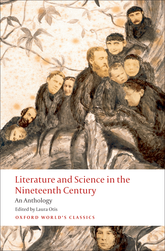 Literature and Science in the Nineteenth Century: An Anthology

‘It has been said by its opponents that science divorces itself from literature; but the statement, like so many others, arises from lack of knowledge.’ John Tyndall, 1874 Although we are used to thinking of science and the humanities as separate disciplines, in the nineteenth century that division was not recognized. As the scientist John Tyndall pointed out, not only were science and literature both striving to better 'man's estate', they shared a common language and cultural heritage. The same subjects occupied the writing of scientists and novelists: the quest for 'origins', the nature of the relation between society and the individual, and what it meant to be human. This anthology brings together a generous selection of scientific and literary material to explore the exchanges and interactions between them. Fed by a common imagination, scientists and creative writers alike used stories, imagery, style, and structure to convey their meaning, and to produce work of enduring power. The anthology includes writing by Charles Babbage, Charles Darwin, Sir Humphry Davy, Charles Dickens, George Eliot, Michael Faraday, Thomas Malthus, Louis Pasteur, Edgar Allan Poe, Mary Shelley, Mark Twain and many others, and introductions and notes guide the reader through the topic's many strands. ABOUT THE SERIES: For over 100 years Oxford World's Classics has made available the widest range of literature from around the globe. Each affordable volume reflects Oxford's commitment to scholarship, providing the most accurate text plus a wealth of other valuable features, including expert introductions by leading authorities, helpful notes to clarify the text, up-to-date bibliographies for further study, and much more.